Boye, an eight year old Bichon Frise, presented to the ophthalmology service for evaluation of diabetic cataracts. Boye had been diagnosed with diabetes mellitus three months prior, and had acted blind for about one week prior to presentation. Initial ophthalmic examination revealed both eyes to be blind due to complete cataract formation. In addition, there was mild anterior uveitis (inflammation within the eye) in both eyes secondary to the cataracts.

Dogs with diabetes mellitus commonly develop cataracts because the elevated glucose level within the lens overwhelms the normal ability of an enzyme within the lens called hexokinase to metabolize this sugar. Therefore, glucose metabolism instead occurs via an alternate pathway involving its conversion into sorbitol, which is a large and osmotically-active molecule that tends to draw fluid into the lens. This results in cataract formation due to disruption of the normal lens fiber arrangement. The only treatment to restore vision lost due to cataract formation is surgery to remove the cataract. This procedure involves the use of ultrasound energy to break up the cataract, and then the cataract fragments are removed from the eye. An intraocular lens implant is placed to restore normal vision.

Prior to surgery, tests to evaluate Boye’s retinas were performed, and his retinal health was determined to be excellent. However, pre-anesthetic lab work revealed a urinary tract infection. Urinary tract infections are common in diabetic dogs, and treatment is necessary prior to cataract surgery because these infections significantly increase the risk of an infection occurring within the eye after cataract surgery. Treatment with an oral antibiotic was prescribed, and a subsequent culture of his urine revealed the infection to be resolved. The uveitis within his eyes was also treated with a topical steroid prior to surgery to improve the chance for a successful outcome.

Surgery was performed for both eyes three weeks after Boye was initially examined. Surgery went very well, and he recovered smoothly from general anesthesia. Boye was discharged the afternoon of surgery with aggressive topical and oral anti-inflammatory therapy to address the inflammation that occurs within the eyes following cataract surgery. His owner immediately noted the improvement in Boye’s vision. He was interested in his toys again, which he had ignored since he developed the cataracts. Subsequent rechecks revealed Boye’s eyes to be healing well, except for the development of a small corneal ulcer of his right eye. This ulcer healed uneventfully after temporarily altering his therapy, and Boye continues to do well several years post-operatively. 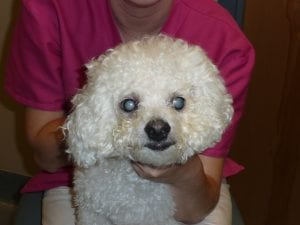